England have won Group D after beating Ukraine while France couldn’t get the win they needed as they lost against Sweden however they still qualified.

France decided to play a few of their fringe players with Hatem Ben Arfa and Yann M’Vila who have hardly kicked a ball this tournament getting a start and Laurent Blanc’s gamble did not pay off. For me the big mistake was leaving out Yohan Cabaye who had been in superb form so far and is someone who I consider to be undroppable at both club and international level. Zlatan Ibrahimovic and Sebastian Larsson scored the goals and they sent their fans home happy. France will now face Spain in the quarter finals.

The England game wasn’t the most exciting and their fans will take confidence from the result however their performance still wasn’t great going forward even with the returning Wayne Rooney in the starting 11. The first half showed England struggle to break down teams that aren’t the best at defending and when they did take the lead early in the second half, it was largely down to a mistake from the Ukrainian goalkeeper Andriy Pyatov. However, it is worth saying that the cross from Steven Gerrard was fantastic and Wayne Rooney had to be in the right position to header home. It wasn’t the most exciting game but England were very lucky when the ball seemed to cross the line before John Terry managed to clear. How the fifth official missed it I will never know and it just shows that they actually are pointless and do nothing. Also, it looked as though the ball hit John Terry’s hand later in the half but that also wasn’t given.

Man of the match- Steven Gerrard- It wasn’t the greatest performance from England but their captain showed his worth by supplying the cross for the goal and putting in a number of other threatening crosses. He linked up well with both Rooney and Danny Welbeck at times and that will be important against better teams. Plus, his partnership with Scott Parker is getting better and better by the game as they know where the other is on the pitch and if they should go forward or sit back and protect the back four. It is refreshing to see Gerrard playing well after all the years of seeing him struggle alongside Frank Lampard. He has easily been England’s stand out player this tournament already and he is finally showing his true ability at international level and is a fantastic example to everyone when he is on the pitch. 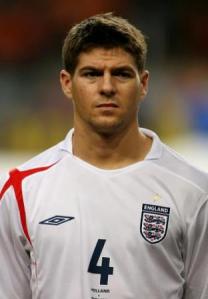 Gerrard is closing in on his 100th cap for England

Finally, I would just like to say I really hate coverage of the England games, especially on ITV as the commentators aren’t impartial at all and try to claim that England are the best thing in world football. They are not and they think every player is brilliant. They don’t even care that much about the opposition and will not even give them that much credit. They hardly talked about Ukraine when their shot crossed the line, instead they focused on how well John Terry did to get back into the right position but who cares about that, he didn’t stop the goal and if the fifth official was awake or we used goal line technology then it would have been a goal so why praise him? Then instead of saying that would have changed the match, they talked about the Germany game at the World Cup. Football doesn’t revolve around England and it is no wonder England fans are always naive and think they can win big tournaments. I support England but I hate the way ITV portrays the players and it really makes me hate watching the national team and that is without even mentioning Adrian Chiles.

8 thoughts on “Player of the day- Steven Gerrard plus My hatred for ITV!”