Everton are a very likable club and they have some good footballers and now under Roberto Martinez they have changed their style and at the moment are playing some wonderful football.

I hope they do very well under Martinez and they can back into Europe but that means it is very difficult choosing my favourite player from their team. I could have chosen someone like Leighton Baines who has arguable been the best left back in the country over the last few years or maybe someone like Steven Pienaar who has proven that he plays his best football at the club. But I have decided to go with someone that I feel has been the most improved player over the last few seasons and that is Seamus Coleman. 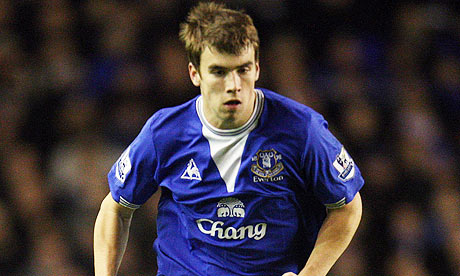 The right back was in and out of David Moyes team for a number of years but now it finally seems that he is getting the opportunity to be first choice consistently and is benefitting from it. The 24 year old has improved his defensive work so much in the last 12 months he is simply too good to drop and with this new style of play being brought into Everton it is important that the full backs get forward and support the front players. He has a lot of pace and his final ball is also improving every time he plays and I am sure he will start getting more assists as the season progresses. He does already have one goal in the Premier League so far this season so he will certainly be looking to add to that. Coleman has played 87 Premier League games now and with 10 assists and five goals he is certainly a full back that needs to be watched when he flies forward, but sometimes stats do not tell the whole truth and because of how attacking both him and Baines are on the other wing it allows the wingers to tuck inside and help out the main striker more so more chances will be created for teammates just simply by his positioning.
Coleman’s international career with Republic of Ireland has not quite taken off yet but hopefully the new manager will recognise his talents and use him to the best of his abilities but so far he has gained 17 caps and will be hoping to add a lot more to that tally.

A few years ago I actually likened him to Gareth Bale (when he was playing at left back) and thought they were similar sorts of players, obviously Bale went onto play a lot higher up the pitch and become one the most expensive player in world football. I do still stand by my comments to a certain extent because I feel that they could both take on players with ease and should have been playing higher up the pitch to cause more damage to the opposition but Coleman has now transformed himself into a very good right back with the potential to become one of the best in the Premier League so he and his coaches deserve a lot of credit for that.

Is Coleman already one of the best right backs in the league? Who is the best?