The transfer saga that will dominate the headlines this summer will once again involve Arsenal and their captain.

This time it is Robin Van Persie when in previous years it has been Cesc Fabregas, however it does still go even further back than that with both Thierry Henry and Patrick Vieira getting linked away from the club every summer. I am not going to go into whether Arsenal are a ‘selling club’ or not because they in my opinion work the transfer market the right way by basically living within their means and even though the fans may not like it, they must accept it.

Van Persie has scored 132 goals in 279 games for Arsenal

I am going to focus more on Van Persie and you can see why he is being linked with the champions from a lot of countries around Europe after last season as he was phenomenal and was probably the best player in the Premier League. He scored 37 goals last season in all competitions but Arsenal still failed to win a trophy and you can understand the reason he wants to leave the club as even with his impressive goal tally, they never looked like winning the Premier League (mostly because of a poor start) and were easily knocked out of the Champions League after a very poor first leg.

Most clubs in the world would love to have the Dutchman in their squads but surely there are only a few that he would want to join. Unsurprisingly, Manchester City are the favourites to sign him and out of everyone in the Premier League I personally think this is the only team he would contemplate signing for. City have bought quite a few players from Arsenal including Samir Nasri last summer so they know they can do business with Arsenal and they won’t refuse to sell RVP to them. But in my opinion they would have to sell a striker first as they have Edin Dzeko, Carlos Tevez, Sergio Aguero and Mario Balotelli all fighting for a first team place already. Personally, I would only have Van Persie over Dzeko so I don’t see the need of them signing him but they will probably try anyway.

Juventus are also heavily linked with RVP and you can see it is because they lack a real goal scorer in their team and if they want to challenge for the Champions league next season then they most definitely need more goals in their side with Alessandro Matri only getting 10 league goals and Mirko Vucinic not even hitting double figures, they need someone that is going to get at least 20 goals. Andrea Pirlo showed at the Euros that he can still be a brilliant player and RVP would score goals for fun with his playmaking abilities. At times, Van Persie made Alex Song look like a pass master with his movement so imagine how good Pirlo will look.

Finally, Barcelona are also linked with him and yet again it is not very surprising to see their name come up however some of the rumours are. If they sign the Arsenal man, they may be looking to offload David Villa who is now 30 and has been out for eight months with a broken leg. If I was negotiating this deal I would definitely try and make it a swap deal. I think Villa is a better player than Van Persie and if he can recapture his form before he suffered his injury then he could actually make Arsenal a better team.

Youssouf Mulumbu has been linked with many clubs this summer and it seems as though his time at West Brom is coming to an end. 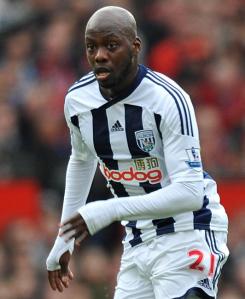 Mulumbu has played over 100 games for West Brom

The midfielder has been impressive since joining the Baggies and has helped them cement their place in the Premier League over the last couple of seasons with his battling displays. He is a very combative midfielder that likes to put in a tackle, but he can also play a bit as well, Mulumbu chips in with the odd goal and can make good late runs into the box to support the strikers. The 25 year old has been at West Brom since 2009 and was very influential in getting them promoted back to the Premier League when they finished runners up to Newcastle United. If he does leave this summer he will no doubt be fondly remembered by the fans mostly because of his 100% commitment to the club while on the pitch but also because he scored the winner in a game against Aston Villa, which was their first victory over them since 1985.

Mulumbu has claimed he has spoken to a number of clubs already but who will want him and is he good enough to make it into the starting 11 of one of the top teams? In my opinion, he may be able to do it as he has shown enough progress already in the Premier League and the fact he is only 25, he will get better. The first team I believe he could be good for is Arsenal as they always seem to be missing a strong central midfielder and have never been able to replace Patrick Vieira. They do currently have Alex Song but he is not a proper holding midfielder and likes to get forward a lot, he has been described before as the most attacking holding midfielder in the world. If they can bring in Mulumbu it would allow Song to get forward more and he showed time and time again this season that he can provide killer passes and set up a lot of goals.

London rivals Tottenham Hotspur have also been linked with him but I do not see this as likely as Arsenal because they already have Scott Parker and Luka Modric to play in the centre of their midfield so he would find it tough to become a first team regular. However, Modric is linked with a move away and if he goes they will need to replace him and both Modric and Mulumbu only get about the same number of goals a season so they would not lose anything in that respect.

Finally, Newcastle United could be interested in him as they have already lost one central midfielder this summer in Danny Guthrie and will need a new one. He may not get a first team slot straight away but he will still rack up the appearances as the season goes on. Another reason why I think he could fit in at Newcastle is that he is what they are now looking for in the transfer market. Someone that is quite cheap and if they do well, their price tag will rise and with Mulumbu only being 25 he could be at the club for a few years and then leave for a lot more than they signed him for. There are already a lot of reports saying he is in talks with Newcastle so this one seems the most likely at the minute.

Fredrik Ljungberg wants to rejoin the Premier League after leaving Shimizu S-Pulse by mutual consent. He does not want to join any Premier League club either with him stating that he wants to join a team that will be challenging at the top of the table. Surely, this means he wants to follow in the footsteps of Thierry Henry because I cannot see Manchester City, Manchester United or Chelsea wanting to sign him as he is getting towards the end of his career.

Since leaving Arsenal he has not been able to settle anywhere having short spells at West Ham, Seattle Sounders, Chicago Fire and Celtic but can he still offer something in the Premier League. He possibly could give Arsenal a lift with them suffering a humiliating defeat against AC Milan, and he is still a very intelligent footballer and will be able to get himself into good positions, pace wasn’t his greatest attribute therefore he has always had to rely on other attributes to influence games.

If he got given a contract till the end of the season, he may be able to produce some moments of magic like Henry has done in his short loan spell but will it really be worth it for him and the club? Probably not because I cannot imagine he would start many games ahead of Theo Walcott and Alex Oxlade Chamberlain so if he did play he would have to play as a central midfielder. Yet again, it’s unlikely that he will be able to get ahead of Aaron Ramsey, Alex song or Mikel Arteta in the pecking order, plus he is about the same level of Tomas Rosicky so he would most certainly be a squad player and at this late stage of his career surely he will want to play as many games as he can.

So if he wants to come back to England he has to look further down the league, I could see Liverpool possibly being interested to add a bit of experience to their squad but they do have quite a few midfielders already so he wouldn’t be guaranteed a start.

The team I think he is most likely to sign for is actually QPR because they will be able to guarantee him a game most weeks, with him playing on the right and Joey Barton playing in the middle. Also they could offer him a very good wage which will obviously interest him but will he want to be involved in a relegation battle.

I would like to see him back playing in England because when he is on form he was one of the very best in the league and scored some very important goals. The Swedish international was a key part of the Arsenal side which played some fantastic attacking football and if he can recreate these types of performance whoever he signs for have got a real player on their hands and may make a big difference to where the team finishes in the league.