Crawley Town are looking for a new manager after recently appointed Sean O’Driscoll decided to leave for Nottingham Forest. 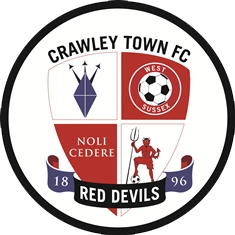 O’Driscoll was given the job on the 16th May and left on 19th July without managing them in a competitive fixture which must have been frustrating for the board who had put a lot of faith in their new man and now their preseason could be in pieces. The new man that comes in won’t have a lot of time to stamp his authority on the side and maybe he won’t want some of the players that O’Driscoll thought were good enough. There will be a number of candidates that want the job but the newly promoted League 1 club will need to make a good choice to make sure they stay in the division, under O’Driscoll I thought they would challenge for the playoffs but now I am not so sure.

So who will be a good choice? At the minute the clear favourite is current Aldershot Town manager Dean Holdsworth. Holdsworth has been working his way up the leagues and has one very well wherever he has been but he doesn’t have the managerial experience in my opinion to lead Crawley next season because he hasn’t worked higher than League 2 and has only joined the Football League in January 2011. Another thing that will put Crawley off going for him is the fact that he signed a new contract in the summer and they will probably have to pay compensation.

Also in the frame for the job is former Aldershot manager Gary Waddock who unlike Holdsworth has managed in higher divisions, however he hasn’t always been so successful. In June 2006 he was appointed manager of QPR but after a poor start to the season and with the club bottom of the table he was replaced by John Gregory. Waddock, has managed in League 1 for two seasons but unfortunately for him they have both ended in relegation with Wycombe Wanderers. Obviously, this means he has gained a promotion with them and he has been relatively successful over the years with him also gaining promotion to League 2 with Aldershot gaining over 100 points.

Finally, Gareth Southgate is linked with the job and this would be an interesting decision because he had a very good career as a player but as a manager he hasn’t had it easy. His only job so far has been at Middlesbrough where he managed 150 games so he has quite a lot of experience and most of these games were in the Premier League. He won 44 of his games as manager but he, like Waddock also has a relegation on his CV but at a much higher level. It is good timing for Crawley as he has recently left his role in the FA as their Head of Elite Development and you would expect him to want to get back into football as soon as possible. He would be a good choice because he will have a lot of contacts in the game and will be able to bring in some good players either on loan or permanently and the board will surely back him in the transfer market.