The draw for the 3rd round of the FA Cup is one of the most exciting days in the football calendar as it can throw up fixtures that nobody will have even imagined.

Clubs from the lower leagues want to draw a big Premier League side and this year hasn’t disappointed in that respect, with the winner of Lincoln City and Mansfield Town hosting Liverpool. This will add even more incentive to the replay and both teams will be hoping that the likes of Steven Gerrard and Luis Suarez will be visiting their stadiums in the very near future. Personally, this is what makes the FA Cup special and in recent years the competition has lost a little of its spark but a tie like this will get a lot of attention and possibly even a giant killing.

Two other teams that have to play again are Harrogate Town and Hastings Town and these will be equally looking to win their game after seeing the draw as they will get to travel to former Premier League side Middlesbrough. The team from Teeside may not be in the top league anymore but under Tony Mowbray they are certainly challenging for a place in the playoffs at least.

Looking at potential upsets in this round, you certainly don’t have to look further than Brighton as they have been drawn against Newcastle United, who they also beat in the competition last year and with the Europa League participants not having the best of times at the moment, I expect this game to be on television so more viewers can see if Brighton can win. Other similar to this are high flying Crystal Palace against Stoke City. The Championship side will be looking to test themselves against an experienced and consistent Premier League side and if they can get through the tie then their fans will be optimistic for the rest of the season and their challenge in the Premier League if they do get promoted at the end of the season.

Two more potential shocks in my mind are Crawley Town vs Reading because Reading may be distracted by their own league form and may discount the cup this season. Also, Luton Town vs Wolves could be a potential shock as going away to a non-league side is always difficult, no matter what position you are in.

Finally, the FA Cup also throws up a few interesting all Premier League ties and this year the biggest one is probably West Ham United and Manchester United who will both be looking for good cup runs this year. West Ham may have hoped for an easier tie but you cannot count them out and will be doing all they can to qualify for the fourth round. Swansea have been given an equally difficult draw at home to Arsenal, but their last performance against the Gunners will give them a lot of confidence but Arsene Wenger really needs a trophy this year and the FA Cup may be the last one they can realistically go for.

Brian Horton has returned for a second spell in charge of Macclesfield Town to try and help them avoid relegation from League 2. 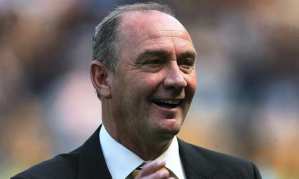 Horton will be manager until the end of the season

Macclesfield are currently 21st in League 2 and are only out of the relegation places on goal difference which has forced the board to sack former manager Gary Simpson. It must have been tough for them to sack him as he became the manager when times were difficult at the club and the whole area was still devastated by the death of Keith Alexander. This is probably why he was asked to stand down rather than sacked like any other manager would have done. However, it probably was his time to go as the team had gone 16 games without a victory and looked like they were going to get relegated.

So, the first thing Horton has to do is, get the players confidence levels up and make sure they believe they can turn it around. It will be difficult as 16 games is a long time and when you are struggling the luck also seems to go against you. Horton, has enough experience to know what to do in these types of situation as he has managed in over 1000 games which is a remarkable record as not many others have reached this amount of games. He got his first job at Hull City in 1984 and has done other roles other than manager since then and this can only stand him in good stead because he will have learned a few things of different people and took their ideas on board.

The last time he was a manager was in 2006 and it was actually at Macclesfield so he will know a lot about the club, what the fans expect and where the club should be. In his previous spell in charge he achieved a 35.88% win rate which is quite good especially when he had to rejuvenate the team when he first took over as they were struggling in the league much like this season and they eventually comfortably stayed up, seven points above the drop zone. In his first full season, The Silkmen challenged for promotion somewhat surprisingly and ended up in the playoff positions but were unfortunately defeated by Lincoln City in the semi finals. Living up to these high expectations was always going to be difficult seen as though the club faced financial problems and therefore did not challenge at the right end of the table and finished 17th.

Horton was sacked in the next season after the team went 12 games without winning and stranded to the bottom of the table. He will be hoping for more success this time around and if he can replicate what he did in his first season in charge it will be fantastic for the club and then hopefully they can push on from there. The new manager has some good players at his disposal but maybe they haven’t quite lived up to their potential, such players as Matt Hamshaw who looked very promising as a youngster at Sheffield Wednesday and Arnaud Mendy who was quite highly rated at Derby County. George Donnelly is another player that at 23 has some potential and could score a lot of goals in this division. So Macclesfield are not quite done yet and if Horton can work the magic and build some confidence then they should comfortably stay up.