Inter Milan defender Lucio’s agent has claimed that he will be leaving the Italian team this summer and is looking for a new adventure in Europe. 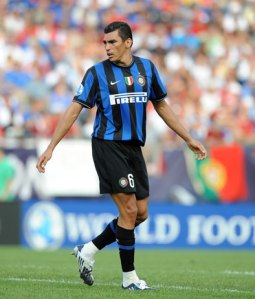 Lucio has played 105 times for Brazil

The Brazilian international has had a fantastic career so far winning many trophies including the Bundesliga three times, Serie A once and the Champions League as well as many cup competitions. He has also played over 100 times for his national team Brazil and helped them to win the World Cup in 2002 which just shows he can perform on the biggest of stages. He first came to Europe to play for Bayer Leverkusen and instantly adapted to German football, not only defending well but also adding goals from defence with his power in the opposition in the box as well as his forward runs in open play. For Bayer Leverkusen he played and scored in the 2002 Champions League final but unfortunately they went on to lose to Real Madrid 2-1. After scoring 18 times for the club, he joined Bayern Munich and went onto even greater success, while he was in the team they were very successful in their own country and even though they couldn’t replicate that form in Europe he was still considered one of the best defenders in Europe.

Even though he was getting older his services were in great demand and he joined Inter Milan and in his first season won the treble in Italy. Inter won the Coppa Italia, Serie A and Champions League against his former club Bayern Munich. He barely missed a game throughout the season and now at the age of 34 he could still make the difference to a lot of teams in Europe. So who could he join in England?

The first team I think he could do a good job is at the current champions Manchester City. When Vincent Kompany and Joleon Lescott were injured last season  they struggled with Stefan Savic and Kolo Toure not looking up to the challenge and costing their team on multiple occasions. I think Lucio would just add extra experience and make a difference particularly in the Champions League because the current team have a lot of world beaters, but how many have actually won the Champions League or World Cup?

Manchester rivals United, should also be looking at him as Sir Alex Ferguson knows they need to improve their team this summer and although I was quite impressed with Jonny Evans this season, I think Lucio is a lot better than him still. Plus Ferguson doesn’t mind bringing in experience as we have seen in the past with players like Laurent Blanc. With Nemanja Vidic struggling with injuries this season he may not be able to get back to his high standards when he returns and with Rio Ferdinand also getting older he will not be able to play as many games next season. Yes they do have Phil Jones and Chris Smalling but they have been used in different positions throughout this season and that little bit of extra experience may have got them over the line this season and secured the title for them.

Finally, Arsenal always need a centre back. Laurent Koscielny has had a very good season in my opinion but he does still make mistakes and Thomas Vermaelen has struggled with injuries at times this year. Lucio is also a lot better than Per Mertesacker and the Brazilian would fit into Arsenal’s style of play a lot better as he is one of the best ball playing centre backs of the last 10 years.

He may not be as quick as he used to be but he still has a lot of very useful attributes and would add something to the very best teams in the Premier League so I think if any of these teams get a chance they should definitely sign him up.