Sheffield Wednesday have gained promotion to the Championship after defeating Wycombe Wanderers on the last day of the season.

So where to start, everyone at the club deserves praise from chairman Milan Mandaric all the way down to the fans who were terrific again on Saturday and just proved that their club deserve to be in a much higher division than League 1 and even put most Premier League teams to shame.

But I am going to start with former manager Gary Megson and first give him praise because in my opinion he deserves a lot of credit for what he has done at Sheffield Wednesday, when he joined the club the players did not understand what playing for Sheffield Wednesday meant and that is the reason why they finished in the bottom half of the league. So in the summer he got rid of a lot of deadwood and players that couldn’t handle playing for such a massive club and brought in players that were wanting to fight for the shirt and give the supporters a Sheffield Wednesday team that they would be proud of and in my opinion made the signing of the season in Jose Semedo. At the start of the season the fans probably would have been happy with the playoffs but there was a chance that the team could finish in the automatic spots so Mandaric had a tough choice to make as it didn’t look like Megson could deliver it.

But fair play to Mandaric, he allowed Megson to take charge of the Derby which was a risk but Wednesday came out on top and everyone got to see how much it meant to Megson when being ridiculed by the United fans he lifted up his shirt and showed them his badge. It was a wonderful moment you just don’t see anymore and it was his passion that got Wednesday that far and it will have hurt him that he was sacked but fast forward a few months and he can have no complaints. 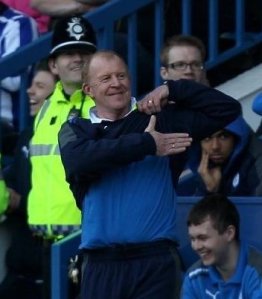 Megson is and always will be a proud Wednesdayite

Dave Jones came in and used everything that Megson had given the team and adding to it by changing the style of play but he always knew that if times were tough in a game he could switch to more of a direct approach as his players could do that. He brought in  Nile Ranger and Keith Treacy to help in the promotion push and they all played their part in getting the team promoted with Ranger and another loan signing Michail Antonio scoring the goals on the final day. What more can you say about Dave Jones he only dropped four points and won manager of the month twice, has there been a better start as a manager?

Onto the players and they deserve credit too because they could have let their heads drop and just been happy with a playoff place especially when United had games in hand and were on a good run but they stuck at and kept going. It was a fantastic effort in the end and they were playing with confidence and gave the fans everything they wanted and more.

I am very happy for Wednesday and their fans because they continually support their team even though there has been very little to shout about in a long time. To make it even sweeter for them they stopped Sheffield United getting promoted so could the season have gone any better? Even Sheffield United’s opponents enjoyed Wednesday’s promotion

Sheffield Wednesday beat Preston 2-0 which sounds quite comfortable but they were made to work for their three points and Dave Jones will be very happy with his team. 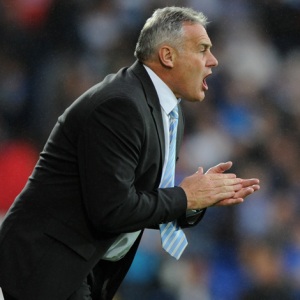 Jones likes his players to keep the ball on the floor

So, what has Dave Jones done to make Sheffield Wednesday into a free scoring side as they have scored in every game he has been in charge and have looked a lot more threatening in recent weeks. First of all though, I would give some credit to Megson for this as he brought in the players who are able to play a long ball game and if things aren’t going well you need other options, especially when the passing game isn’t working and you can’t break down a defence. A lot of teams come to Hillsborough and just sit back and try and get a draw, like what Preston did, and they will succeed if their team is organised and committed for a full 90 minutes against a passing side unless there is a moment of brilliance from someone and sometimes the long ball can cause confusion and is good to have both options.

Onto Dave Jones, what has he actually done for Wednesday or is it simply just the honeymoon period a lot of managers get when they take over? Well to me what he has done is brought in his own style and made the players play his way from the off. He plays with two out and out wingers which straightaway forces back the opposition and makes their fullbacks reluctant to push forward as much. When you have Michail Antonio on one side and Jermaine Johnson on the other you know that if these players have the ball they will take on the opposition and create chances especially on a counter attack.

Jones has also brought in Nile Ranger who is a very good player but maybe has an attitude problem at times. Ranger, is direct and has pace to burn which just adds to teams ability to counter attack. Something that may have been missing under Megson, as his tactics were to keep the pressure on hopefully the opposition will crumble. I cannot imagine Jones playing David Prutton out of position on the wing as Megson did because it wouldn’t work with his style of football.

Gary Madine scored both the goals and looked very impressive throughout linking up the play well. He probably enjoys the way the team are playing now because he doesn’t have to challenge as much in the air anymore and can receive the ball into feet and have a lot of runners going either side of him. But yet again, Megson’s style of football probably taught him a few things and his second goal showed that with it coming from a long throw and him making a good run and attacking the ball powerfully.

Rob Jones picked up a yellow card which means he is now suspended which could be a blessing in disguise in my opinion as he does look to send it long too often whereas his partner against Preston, Miguel LLera, looked to play it out from the back and it was clear to see which way was more effective. With Danny Baath also having a great season and more of ball player than Jones, he may find himself frozen out of a Dave Jones side.

Nile Ranger has been given yet another chance by going out on loan to Sheffield Wednesday from Newcastle United.

The troubled striker has been in the headlines for all the wrong reasons and some people may actually know him for his court appearances rather than his time on the football pitch. But the player definitely has the potential to be successful and has actually made over 50 appearances for Newcastle with 24 of them coming in the Premier League. He has only scored three goals for the club though but in his defence most of these appearances have been off the bench where he hasn’t had much time to make an impact on the game. However, one game in particular sticks in my mind where he did have a positive impact on a game. He came on against Liverpool for Newcastle and he bullied their defence leading to a mistake which allowed Newcastle to take the lead. 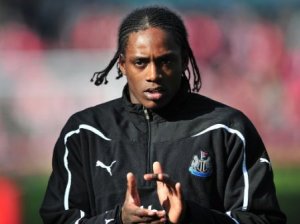 Ranger signed a new 5 year contract at Newcastle in 2010

Ranger has all the attributes to be a good striker and a consistent goal scorer because he is quick and has a lot of strength, add this to his size and you have a very promising player on your hands and hopefully Dave Jones can change his attitude and give him an opportunity to show his abilities for the rest of the season. Maybe that is all the 20 year old needs, a new start in a new location. When he was on loan to Barnsley he didn’t make as much an impact as he wanted because he got injured after only five games which must have disappointed everyone involved in the transfer.

Even from a young age Ranger was involved in controversy when he was released by Southampton after being sent to a Young Offenders Institute for his part in an armed robbery. But after a successful trial with Newcastle it seemed like he was going to get his career back on track and their relegation to the Championship gave him the opportunity to showcase his talents. But in 2011, he returned to his old ways and was arrested on suspicion of assaulting a man in the city centre leaving the victim unconscious, then a few months later he was charged by police for being drunk and disorderly and was handed a six month conditional discharge.

Ranger has also not used the social network site Twitter in a responsible way as he posed with a gun and was questioned by police for his actions. He then made homophobic remarks which got him in trouble with the FA and had to pay a fine.

This signing seems a little ridiculous in my opinion because he is clearly not someone you want in your dressing room as he seems to attract trouble and media attention of the wrong kind which is exactly what Wednesday don’t need right now as they try and challenge for automatic promotion. Only a few days ago, he was back in court for breaching the terms of his bail.

There is no doubt there is a good player in there and if Wednesday can utilise him properly he could help get the team promoted and it may be beneficial to the player himself. If he grows up, he could become a very useful asset in the Premier League for Newcastle as he does still have three years left on his contract at the club. Time to grow up Nile Ranger and make a name for yourself in the right way.